Dinosaur Provincial Park is famous for containing some of the richest dinosaur fossils in the world. Forty dinosaur specimens were found at the park, and over five hundred have been shifted and displayed in museums around the world. The specimens discovered, dating back to 75-77 million years in the past, were unmatched in terms of quality. The park was founded on June 27, 1955, on the occasion of 50th Jubilee year of Alberta, with the aim of safeguarding the fossil beds. Till 1985, discovered specimens had to be transported to museums around the globe for display and scientific analysis.

The Park is located in Red Deer River Valley and is notable for prairie grasslands, badlands, and riverside cottonwoods. Many animals and birds are seen at the park including coyotes, nighthawks, cottontail rabbits, mule deer, and pronghorn. Curlews and Canada geese are seen in spring and summer. Some snake species including prairie rattlesnake, bull snake, and the red-sided garter snake are also present in the park. The flora includes varieties of cactus.

Some exotic marine life including sharks, rays, paddlefish, gars, bowfins, and teleosts have been preserved in the park. There are also frogs, salamanders, lizards, crocodiles and variety of turtles. Mammal fossils include isolated teeth, fragmented jaws with teeth, and fragments of the tooth of shrew-sized and mouse-sized animals.

Plant fossils include fern fronds, wood, and foliage of some conifers and leaves of some species. There is also a rich collection of spores and fossil pollen. 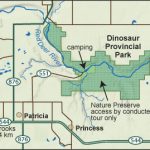 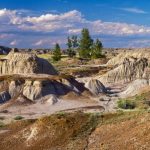 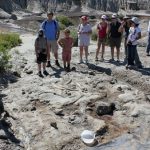 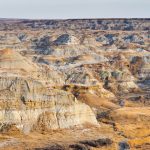 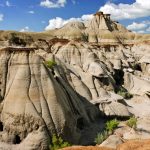 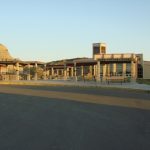 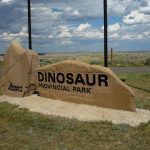 The exposed sediments in the badlands were formed over a time span of around 2.8 million years at the Campanian stage during the Late Cretaceous era and belong to three diverse geologic formations. The oldest is the Oldman Formation which forms the top of the land. This is covered by the terrestrial Dinosaur Park Formation which is further covered by the marine Bearpaw Formation. The Dinosaur Park Formation consists most of the dinosaur skeletons and were deposited 76-75 million years ago.