The Chongoni rock art area comprising 127 sites situated within the forested granite hills of the Malawi plateau, features the most significant collection of rock art in Central Africa. The collection portrays the artwork and paintings of the BaTwa hunter-gatherers who lived in the area from the late Stone Age and the creative genius of the Chewa farmers who inhabited the area from the late Iron Age. The rock art representing rituals and ceremonies are mostly the work of women members of the Chewa clan. Artifacts dating back to 2500 BP have been unearthed which established the fact that the area was inhabited by the hunter-gatherers who are credited with the artwork during the late Stone Age.

The settlements during the Iron Age are tracked down from 1st millennium AD. The hunter-gatherers and the farming community worked together until the 19th century when the hunter-gatherers were merged into the farming group. During the 15th century the Maravi Chewa group, after whom the country is so called, migrated from Lubaland’s northwestern region, combined all the groups and founded the Maravi Empire. Then came the Ngoni people from South Africa who settled in Chongoni’s southern part. The local Nyau people were in conflict with the Ngoni,  and thus shifted to hiding places. In spite of facing opposition from the Ngoni, the colonial administration, and the missionaries, the Nyau community upheld their culture.

In 1924, the area was declared a Forest Reserve and demarcation of boundaries of the villages took place. It was during the 1930s that the finding of first rock art was reported and details of few sites were published in 1950s. In 1969, five rock art sites were proclaimed as protected national monuments. 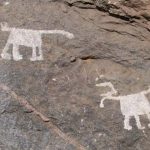 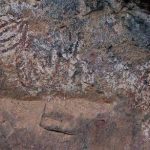 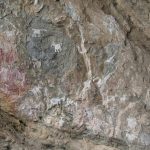 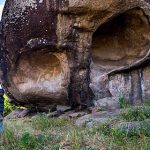 The red color, used by the BaTwa people was replaced by white clay when Chewa farmers settled into the area. The tradition is still in practice today and is related with ceremonies and rituals. The rock art stands as a symbol of the Nyau people’s Chewa secret society.

The rock art sites belong to four traditions, two belonging to the BaTwa Pygmies – the earliest group of hunter-gatherers, the farming community, the Ngoni people and the colonizers.