Brimstone Hill Fortress National Park is a site of great historical, architectural and cultural significance. The site consists of a fortress, located on Brimstone Hill on the island of St. Kitts in the Eastern Caribbean. The fortress reflects the marvel of British military engineers who designed it to the precision and also bears testimony to the skill, endurance and strength of the African slaves who built it. The island of St.Kitts was under the British and French colonial rule who shared the island between 1627 and 1713.  In 1690, the British troops mounted canon on the Brimstone Hill to recapture Fort Charles from the French as the French did not consider it possible to bring canon on the steep hill. From then on the construction of the fort was carried out sporadically for just over 100 years. In its prime, the fort was referred to as “the Gibraltar of the West Indies” due to its height and steepness, its closeness to the ocean and its invulnerability.

The fort was sieged by the French, under Admiral Comte François Joseph Paul de Grasse in 1782. The adjacent island of Nevis surrendered during the siege and guns from Fort Charles, and other forts were brought to St. Kitts to use against Brimstone Hill. The British failed to displace the French and ultimately surrendered after a month of siege. But, after a year, St. Kitts, Brimstone Hill and the island of Nevis were restored to the British rule as per the Treaty of Paris.

Subsequently, the British intensified the fortifications, and Brimstone Hill was never again under any enemy force. In 1806, the French navy tried a failed attempt to recapture the fort. In 1853, the fort was abandoned by the British which led to the deterioration of the structures.

The restoration and stabilization work was started in the early 1900s, and the first completely restored area was reopened by HRH Prince Charles in 1973. Queen Elizabeth II of Britain unveiled a plaque in 1985 to declare the Brimstone Hill as a National Park – the declaration was made official in 1987. 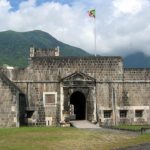 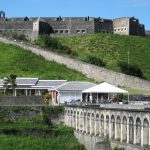 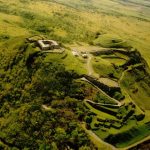 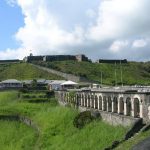 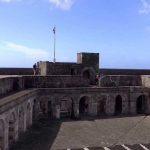 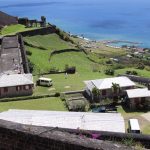 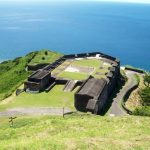 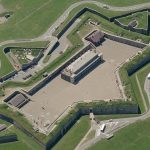 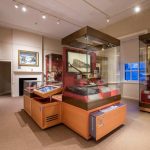 The site became the foremost tourist attraction on the island. The positioning of the fortress itself presents a panoramic view of the forested mountains, agricultural fields and neighboring islands across the Caribbean Sea. The places to visit on the Brimstone Hill include Fort George Citadel including the Fort George Museum, the Western Place of Arms and the Eastern Place of Arms. Then there is the Magazine bastion, the walls of which were breached by the French in 1782, and the ruins of the various divisions of army quarters.