The Roman Catholic Church of Baclayon, located near the city of Tagbilaran, is one of the oldest churches in the Philippines founded by the Jesuits in 1596. In 1717, it was converted into a parish church while the construction of the existing coral stone church took another 10 years to complete. In 1768, the Jesuits were followed by the Augustinian Recollects who intensively renovated the Baclayon Church.

Previously, the Baclayon Church as well as the Loboc, Guiuan, and Maragondon churches were included in the Tentative List of UNESCO World Heritage under the “Jesuit Churches of the Philippines” group. The Church building was severely affected when a 7.2 earthquake hit Bohol in 2013. The evangelization of Baclayon was started by the Jesuit priests who spread Christianity in Bohol. The first Jesuits to arrive in Baclayon were Fr. Gabriel Sanchez and Fr. Juan de Torres, who founded the Baclayon Church in 1596. The church underwent major renovation works under the supervision of the Augustinian Recollects including Pedro de la Encarnacion, Antonio Ubeda, and Jose Maria Cabanas. It suffered damages during the World War II but was eventually restored to its original state.

The church, constructed of coral stones, has a cruciform architectural plan with the junctures being crowned by a pyramid-shaped wall. Its position is strategically important as it faces the sea. The defensive stone walls that surrounded the original church complex were removed during the 1870s. Moreover, galvanized iron replaced the tiled roofs in 1893.

The façade, situated behind the portico, was constructed in 1727 by the Jesuits. It features a choir loft that has a 19th-century pipe organ. The portico, added in 1875, is connected with the façade by a trail of blue tiles.

The entrance to the church is surrounded by an arcade that leads to the narthex. A new wooden floor was built in 1852, as the floor on the inside was lower than the surface outside. The wooden floor was replaced by a tiled floor during 1874-1875. Inside the church, several reddish paintings dating to 1856-1859 can be seen on the wooden panels. The church on its right side has an 1870-pulpit made in Baroque and Neoclassical style. 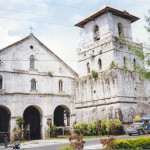 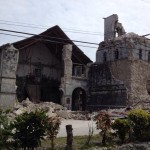 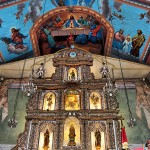 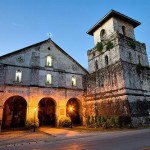 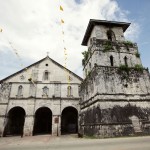 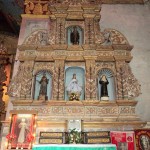 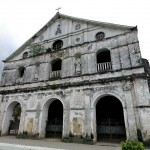 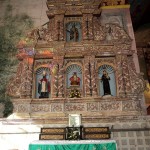 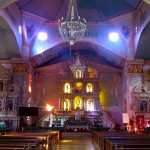 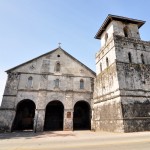 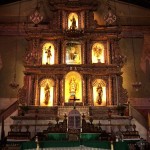 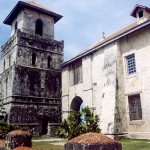 The watchtower or the bell tower, though left incomplete by the Jesuits, was completed by the Augustinian Recollects. Constructed of coral stones, the tower was originally detached from the church but was connected following the inclusion of the portico.

A branch of the left transept was used by the Jesuits as the living quarters. It was further extended in 1872 under Father Cabanas and was transformed into a proper convento (clergy house). It is a true stone house since its first floor is constructed of coral stones combined with egg white and plaster while its second floor is made of bamboo.