Abbey of Saint Gall is a religious, building complex located in the city of St. Gallen, Switzerland. It is a classic example of a great Carolingian monastery and considered the best Baroque architecture in Switzerland. Since the 8th century, it was one of the most significant cultural centers in Europe until its secularization in 1805. Saint Othmar founded it on the spot where Saint Gall constructed his hermitage. Saint Gall, an Irish monk, erected a hermitage which eventually became the monastery. After the death of Saint Gall in 646, Othmar was appointed by Charles Martel as the custodian of Gall’s relics. It was during the rule of Pepin the Short that Othmar founded the Abbey of St. Gall, where literature and science flourished.  The abbey developed further, and many noblemen from Alemanni became monks. During the rule of Abbot Waldo of Reichenau, copying of manuscripts began which eventually paved the way for a library.

The Era of Prosperity (The Golden Age)

In the 9th century, the abbey ran into conflict with the Bishopric of Constance. It was in 813 when Emperor Louis the Pious confirmed imperial immediacy of the abbey that the dispute stopped.   The abbey was transformed into an Imperial Abbey and King Louis the German confirmed its immunity in 833.

The abbey flourished from this time till the 10th century. Many famous scholars that include Notker of Liège, Notker Labeo, Notker the Stammerer and Hartker were associated with the abbey. The library got expanded during the 9th century. The abbey purchased manuscripts on various topics and copies were made. More than 400 manuscripts are preserved and can be found in the library today.

Between 924 and 933 the abbey was threatened by the Magyars resulting in the removal of books to Reichenau. Among these, many were not returned to the library. In 937, the abbey was damaged by fire though the library survived.

The abbey turned into a Princely Abbey when Abbot Ulrich von Sax was crowned as a Prince of the Holy Roman Empire by King Philip of Swabia in 1207. The abbey started getting involved in local politics which resulted in its decline.

In 1524, the town of St. Gallen embraced the Reformation while the abbey remained Catholic, which resulted in disharmony between the town and the abbey.

The abbey was raided by the Calvinist groups in the 16th century, and many old books got scattered. Abbot Diethelm started the restoration which prevented the decline. The library was expanded too. A final attempt was made to expand the abbey which resulted in the demolition of most of the medieval monasteries. The new edifice including the cathedral was designed by architect Peter Thumb. The construction in late Baroque style took place between 1755 and 1768. 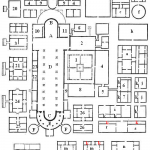 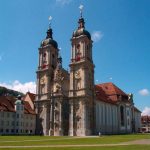 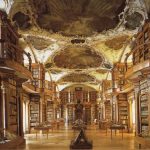 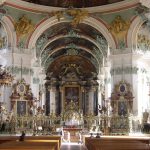 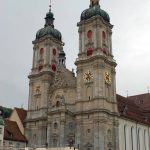 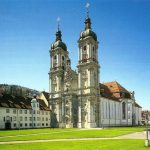 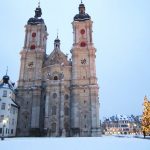 Abbey of Saint Gall in Front 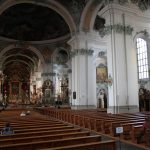 Abbey of Saint Gall Inside 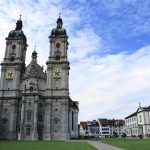 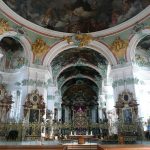 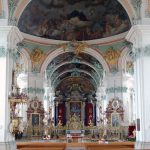 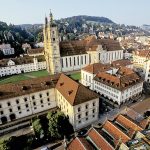 The Abbey library of Saint Gall is regarded as the treasure trove among the medieval libraries in the world. It houses invaluable collections of early medieval books. According to data of 2005, the library contains more than 160,000 books out of which 2100 are handwritten. Among the handwritten books, almost half of them are from middle ages and 400 of the copies are more than 1000 years old.

Among the many precious items, the library houses a unique 9th-century document known as the Plan of St. Gall which happens to be the only major architectural drawing that has survived from the early middle ages. The Plan drawn was not built but, was so called because it was kept at the library.